Reception for Artists Philip Chan and John To 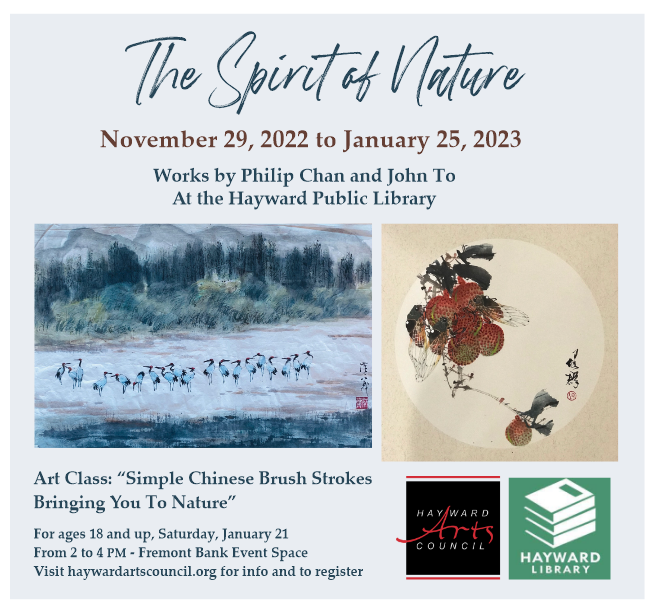 Teens , Adults
Please note you are looking at an event that has already happened.

Join us for a special opportunity to meet and celebrate noted artists Philip Chan and John To, in conjunction with "The Spirit of Nature" exhibit of their paintings at the Hayward Downtown Library Gallery (November 29, 2022 through January 25, 2023), in celebration of Chinese New Year on Sunday, January 22.

Please note that on Saturday, January 21, from 2-4 pm, Philip Chan and John To will be leading a free class "Simple Chinese Brushstroke Techniques," to help you learn techniques to paint a variety of nature scenes. Registration is required and space is limited. To sign up, visit https://hayward.librarycalendar.com/event/art-class-simple-chinese-brushstroke-techniques-artists-philip-chan-and-john

Philip Chan resides in San Francisco. A native of Toisan, Guangdong Province, China, he was educated in Hong Kong. While there, he began to study Chinese brush painting in the 60s under the Lingnan School (Linfunglau Art Studio). He graduated from the University of Calgary in Canada in the 70s. While abroad, he took up western painting, and this enhanced his style and approach towards art. His paintings of flowers, birds, insects, animals and landscape capture the essence of the Lingnan School. Yet his works flow fluidly between the East (Ink) and the West (Colors/Splash). His compositions are simple but unique. His brushstrokes are elegant yet free spirited. His birds and animals are realistic but graceful.

Mr. Chan has had multiple exhibitions in Hong Kong, Macau, Taiwan, mainland China, Canada, and the United States. He is an honorary advisor to the Oriental Art Association, and has been helping to promote art events with his wide expert knowledge in the art world.

John To resides in Castro Valley. He was born in Vietnam in 1947. He studied the Lingnan Style of Chinese painting with master Luong Thieu Hang in Vietnam before coming to the United States. Later he studied with professor Lui-Sang Wong, whose paintings are collected and shown at the SF Asian Art Museum.

John To is a gifted painter of flowers and birds in the realist style, particularly known for his peonies. In his painting, To combines a traditional Chinese aesthetic with modern elements to create work with wide appeal. He exhibited his first solo show at the Clay Studio in San Francisco in July 1993. He has participated in many art exhibitions in the San Francisco Bay Area. In 2014 and 2015, he was awarded “Best of the Show” in the Trilogy Annual Juried Art Shows. He is currently the President of the Oriental Art Association.

From 2012 to 2019 Mr. To taught Chinese Painting at the Hayward Senior Center at the Hayward Japanese Garden. He has influenced many artists from all over the East Bay. During this pandemic period he has continued his painting while also providing his support to his students and artist friends via social media.

This event is co-sponsored by the Hayward Arts Council and Hayward Public Library.